Order at the Bazaar: Power and Trade in Central Asia 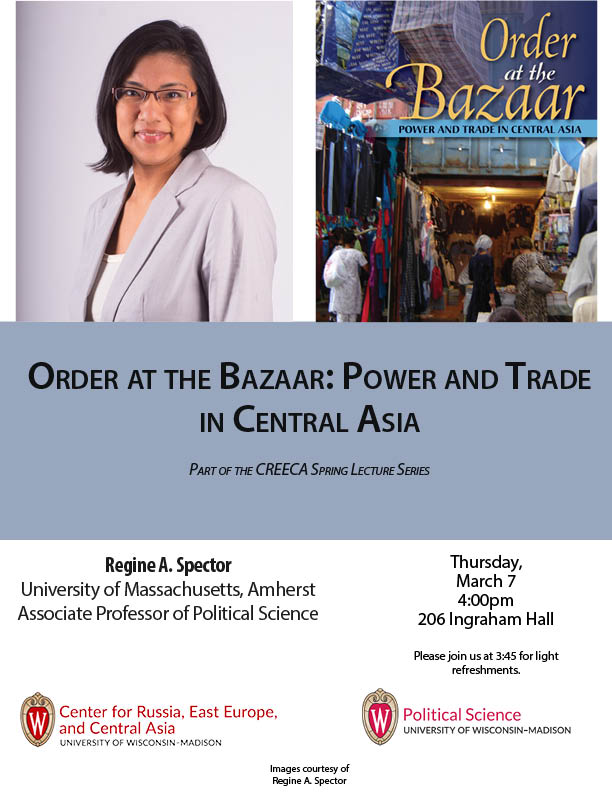 The author will present key findings from her book, Order at the Bazaar, based on research in Kyrgyzstan. The book delves into the role of bazaars in the political economy and development of Central Asia. Bazaars are the economic bedrock for many throughout the region—they are the entrepreneurial hubs of Central Asia. However, they are often regarded as mafia-governed environments that are largely populated by the dispossessed. By immersing herself in the bazaars of Kyrgyzstan, Regine A. Spector learned that some are rather best characterized as islands of order in a chaotic national context. Spector draws on interviews, archival sources, and participant observation to show how traders, landowners, and municipal officials create order in the absence of a coherent government apparatus and bureaucratic state. Merchants have adapted Soviet institutions, including trade unions, and pre-Soviet practices, such as using village elders as the arbiters of disputes, to the urban bazaar by building and asserting their own authority. Spector’s findings have relevance beyond the bazaars and borders of one small country; they teach us how economic development operates when the rule of law is weak.

Regine A. Spector is an Associate Professor in the Department of Political Science at the University of Massachusetts, Amherst. She studies the creative, contentious and politically fraught processes that undergird the creation of new market economies. Her first book, Order at the Bazaar: Power and Trade in Central Asia (Cornell University Press 2017) examines local understandings and practices related to marketplace orders in Kyrgyzstan. She has also published articles in Problems of Post-Communism, Post-Soviet Affairs, Review of International Political Economy, and Central Asian Survey on bazaars in Kazakhstan and the recomposition of apparel manufacturing in Kyrgyzstan. She teaches courses at the undergraduate level in comparative political economy, Central Asian politics, and energy politics and at the graduate level in political economy of development. Spector holds a Ph.D. from the University of California, Berkeley in Political Science and a BA and MA in International Relations and International Policy Studies from Stanford University.