Between the Nile and the Neva: St. Petersburg Multilingual Jewish Text 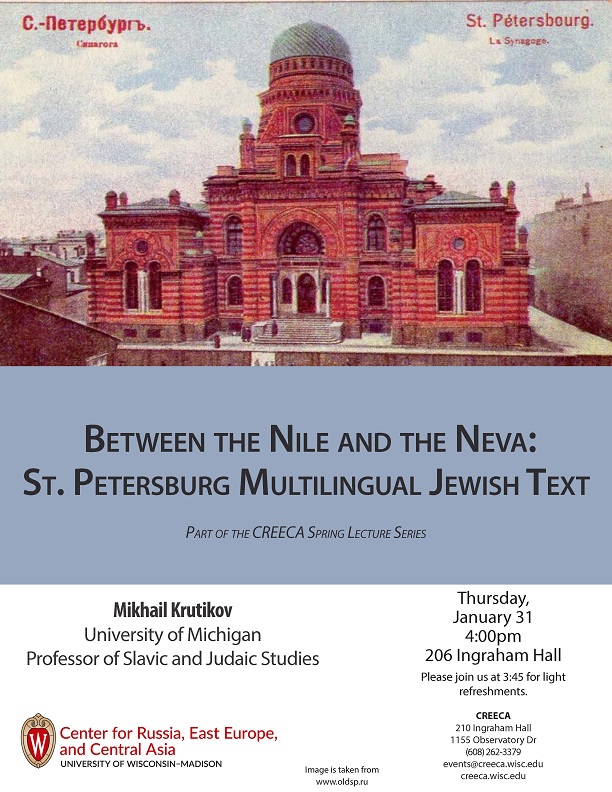 Since Yuri Lotman and Vladimir Toporov introduced the concept of the “Petersburg Text” in Russian literature, the idea of “reading” urban space through the lenses of a particular literary corpus has become popular among Russian literary scholars. But St. Petersburg also occupied a special place in the imagination of Russian Jews. As the capital of the Russian Empire, the city had the harshest restriction on Jewish residence, and yet it became a major center of multilingual Jewish culture. In my presentation I attempt to apply the concept of “Petersburg Text” to the multilingual corpus of Jewish writings about St. Petersburg/Leningrad. I would argue that by exploring the intertextual dynamics of the image of St. Petersburg in the prose and poetry in Russian (by Osip Mandelstam and Lev Lunts), Hebrew (Yehuda Leyb Gordon and Haim Lenski), and Yiddish (by Sholem Aleichem and Sholem Asch) we can gain new insights into the more general problem of modern multilingual Jewish literature.

Mikhail Krutikov is Preston R. Tisch professor of Slavic and Judaic Studies and currently the chair of the Department of Slavic Languages and Literatures at the University of Michigan, Ann Arbor. He is the author of Yiddish Fiction and the Crisis of Modernity, 1905-1914 (Stanford University Press, 2001) and From Kabbalah to Class Struggle: Expressionism, Marxism and Yiddish Literature in the Life and Work of Meir Wiener (Stanford University Press, 2011); he co-edited nine collections on Yiddish literature and culture, most recently, with Gennady Estraikh, Three Cities of Yiddish: St. Petersburg, Warsaw and Moscow (Oxford: Legenda, forthcoming in November 2016). His new book, Der Nister’s Soviet Years: Yiddish Writer as Witness to the People, is forthcoming with Indiana University Press in 2019. His current project explores representations of urban space in Jewish literatures. Since 1999 he has been a cultural columnist for the Yiddish Forward, and his collection of essays Tsvish shures (Between Lines) is published this year in the series Contemporary Yiddish Literature