Some CREECA Spring 2022 Lectures are held in-person on Thursdays, 4:00 p.m. – 5:15 p.m. in 206 Ingraham Hall. Other lectures are held over Zoom, so check the posting on the online calendar to see where your event will be!

An at-a-glance list of Spring 2022 Lectures can be viewed here.

Uzbekistan and Belarus: How 20th Century experiences shape the present 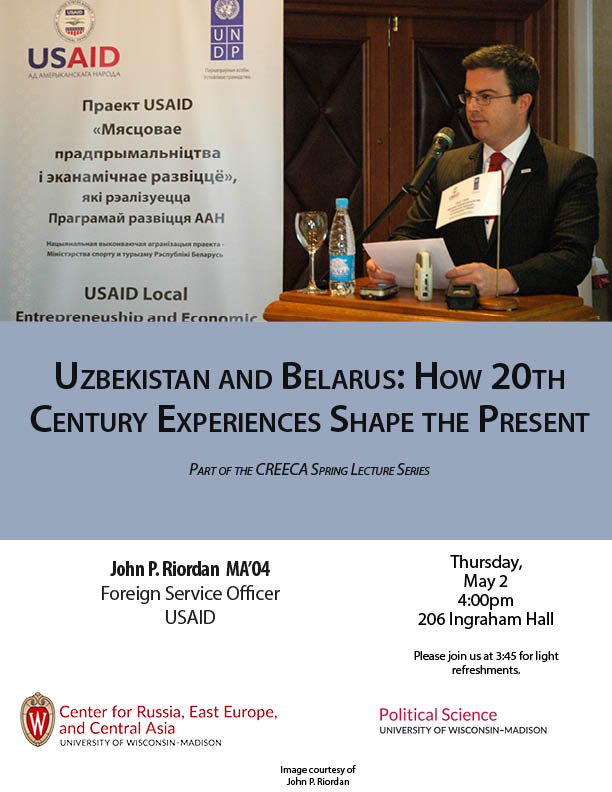 Drawing on a mixture of archival research and extensive on-the-ground experience, Mr. Riordan will engage participants in a discussion of pivotal events and issues of identity emanating from 20th Century conflicts such as the Great Patriotic War. He will explore how these events continue to impact and influence current trends in both Uzbekistan and Belarus. The framing of these pivotal 20th Century experiences in today’s context is key to understanding current trajectories and the societal fabric in both Uzbekistan and Belarus.

John P. Riordan is a career Foreign Service Officer who is currently serving as a Development Advisor to U.S. Special Operations Command (SOCOM). Prior to this role, Mr. Riordan was the USAID Country Director in Uzbekistan (2014-2017) and the Agency’s Country Director in Belarus (2009-2013). He was recognized in 2017 with a Diploma of Commendation from the Ministry of Foreign Affairs of Latvia for his decade contribution to fostering a close relationship between Latvia and the United States and in jointly providing support to strengthen civil society in Belarus and Central Asian countries. Mr. Riordan was the USAID Development Adviser to the command group at Combined Joint Task Force 101 and 82 in Bagram, Afghanistan (2008-2009). Riordan served two assignments in Iraq (2006 & 2008, respectively) as the Deputy Director of USAID’s Governance and Provincial Reconstruction Team Office during the U.S. Government “surge,” and then helped to launch the Joint Interagency Task Force at Multi-National Forces-Iraq. He also served at the Agency’s mission in Romania. Before joining USAID, Riordan lived and worked in the Ferghana Valley region of Central Asia. Selected as a Fulbright Scholar to Uzbekistan, he lectured at Ferghana State University and was the first American to conduct research in the Ferghana City archives; he also collected oral histories of Great Patriotic War veterans in order to better understand the formation of Soviet identity in Central Asia. He was aa Peace Corps Volunteer in the Ferghana Valley region of Kyrgyzstan (1998-2000). Riordan earned a master’s in military arts and sciences from the School of Advanced Military Studies at the Command and General Staff College at Ft. Leavenworth, Kan., and a master’s in Russian, East European, and Central Asian studies from the University of Wisconsin-Madison. He completed his undergraduate degree at Marquette University.