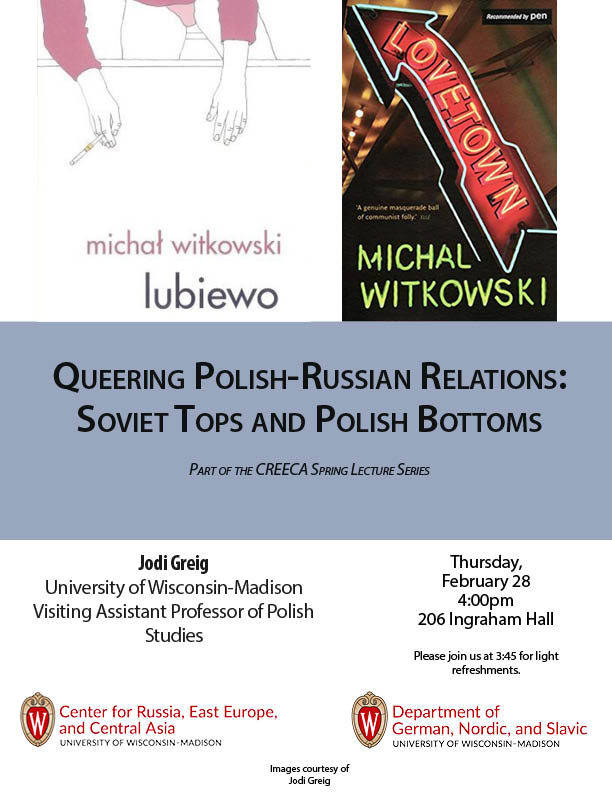 This lecture examines Michał Witkowski’s 2005 critically acclaimed novel Lubiewo (Lovetown). Witkowski’s novel builds an ethnography of a lost era, permeated with nostalgia for socialist Poland and for the seemingly plentiful queer sexual encounters in parks and Soviet barracks. In my reading of the novel, I demonstrate how Witkowski interrogates mainstream Polish narratives of moving from oppression to freedom, occupation to autonomy, stagnation to development, as well as narratives of progress tied to capitalism and globalization. Lubiewo challenges these tropes through a mapping of sexual and nostalgic pleasures derived from Polish encounters with Russian imperialism, specifically taking pleasure in the “bad” socialist past, and in a decidedly queer Slavic brotherhood.

Jodi Greig is a Visiting Assistant Professor of Polish Studies in the Department of German, Nordic and Slavic at the University of Wisconsin. Her research explores how LGBTQ narratives, particularly those that draw on historical figures or communities, negotiate national belonging. Her current book project stems from her interest in how Polish history is represented “queerly” in the present; the book chronicles representations of sex between Russians and Poles in 19th, 20th, and 21st century Polish literature, film, and theater, interrogating the colonial or post-colonial framework through which such relations are often understood today.