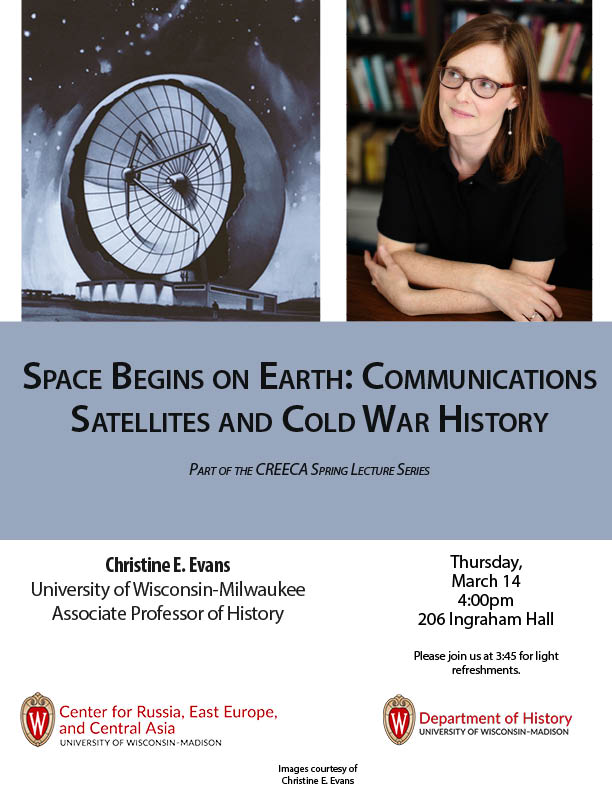 In the nearly two decades between the first transatlantic satellite television broadcast demonstration in 1962 and the rise of direct broadcast satellite service after 1980, the US and USSR developed two rival, intergovernmental satellite communications networks, the US-led INTELSAT and the Soviet-led Intersputnik. Yet this apparently typical story of Cold War competition and division conceals a much messier reality of interconnection, mutual influence, and shared anxieties that helped shape the future of both satellite communications and international cooperation in space from the early 1970s onward. Drawing on US and Soviet diplomatic and technical archives, interviews, and marketing and training materials, this talk will explore what the history of communications satellite infrastructure can tell us about the Cold War and of the US-Soviet “space race.”

Christine E. Evans is Associate Professor of History at the University of Wisconsin-Milwaukee. Her first book, Between Truth and Time: A History of Soviet Central Television (Yale University Press, 2016), received Honorable Mention for the 2017 USC Book Prize for Literary and Cultural Studies of the Association for Slavic, Eastern European, and Eurasian Studies. She is the author of articles on Soviet and post-Soviet Russian television, late Soviet culture, and the production and commemoration of transnational media events. Her most recent article, entitled Symbolic state-building in contemporary Russia, has just been published in the Post-Soviet Affairs. Evans’s current project, a book manuscript coauthored with Lars Lundgren (Media and Communication Studies, Södertörn University, Stockholm) and supported by a major grant from the Swedish Östersjöstiftelsen (Baltic Sea Foundation), explores the transnational history of satellite communications infrastructure during the Cold War.