If the Walls Could Speak: Inside a Women’s Prison in Communist Poland 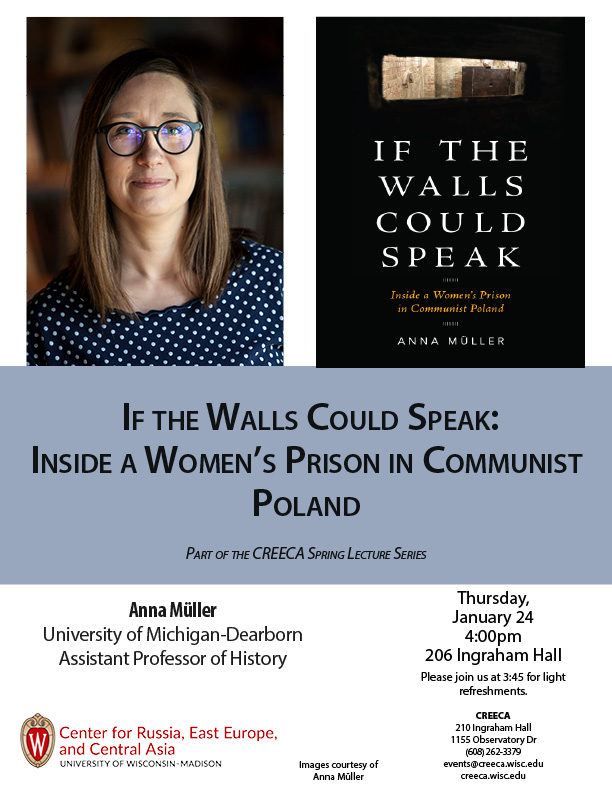 Anna Müller will discuss her new monograph, If the Walls Could Speak, an intimate account of the lives of female political prisoners in Stalinist Poland. Müller portrays the individuality, the humanity, and ultimately the resistance of a dedicated group of women who were incarcerated for their attempts to save Poland. Using archival documents and extensive interviews she opens up the world of grueling interrogation, torture, show trials, and the boredom of everyday existence as political prisoners tried to breath new meaning into their lives. In Müller’s account, prison was both the centerpiece of Stalinist Poland and the central experience in the biographies of the women she represents, many of whom never fully recovered from their incarceration. This is an untold story that evokes the particularities of the Stalinist past and the gruesome toll it took on some of Poland’s most committed patriots. Anna Müller opens up this period with all of its dedication and fear, desperation and paranoia, while also returning dignity to a category of women who paid the ultimate price for patriotic devotion.

Anna Müller is an Assistant Professor and the Frank and Mary Padzieski Endowed Professor in Polish/Polish American/Eastern European Studies at the Department of Social Sciences at the University of Michigan-Dearborn. She is the author of If the Walls Could Speak: Inside a Women’s Prison in Communist Poland. From 2010-13, she worked for the Museum of the Second World War (in Gdansk) as a curator responsible for the sections devoted to the Holocaust, the concentration camps, and eugenics.