Red Allah’s Oil: Arts of the Revolution and the Energy of the Colonized 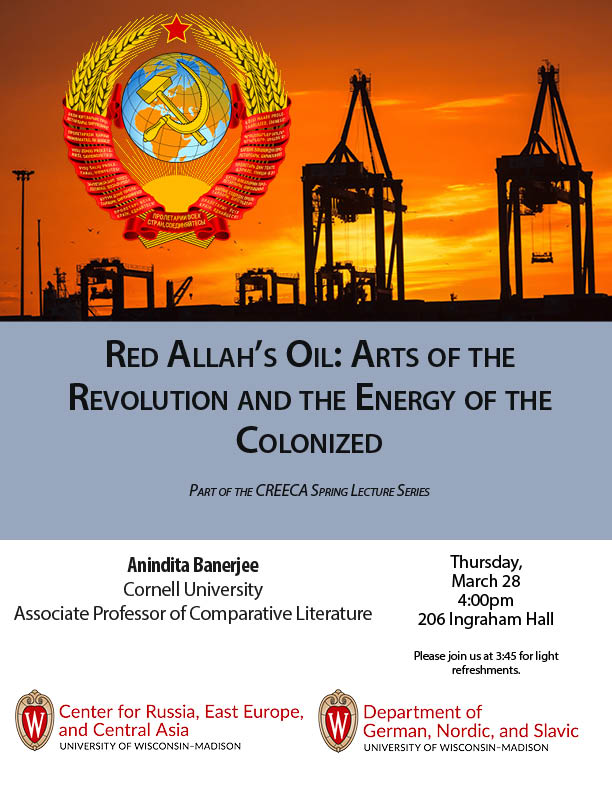 Oil and Russia are usually invoked together in an isomorphic economic and political continuum of resource extraction, state power, and national identity. This talk offers a counter-narrative from a hitherto unexamined frontier of Russian literature and art in the heady years following the October Revolution. For prominent representatives of the Russian avant-garde, the geo- and bio-politics of petroleum emerged as the primary fuel of a transformative utopian aesthetics not in the metropolitan centers of European Russia, but at the offshore drilling sites of the Caspian Sea teeming with migrant workers from the colonies. Combining insights from the emerging field of energy humanities with new archives of writers, artists, and filmmakers who congregated in the oil city of Baku in 1920 for the First Congress of the Peoples of the East, I examine how the material potentials of petroleum converged with the spiritual energy of anti-imperial struggle to shape a unique imagination of Red October’s internationalist promises.

Anindita Banerjee is an Associate Professor of Comparative Literature, an advisory member of the Atkinson Center for a Sustainable Future, and chair of the environmental humanities concentration at Cornell University. Her research focuses on science fiction and technocultural studies, environmental humanities, media studies, and migration studies in Russia and Eurasia in active dialog with the Indian subcontinent and Latin America. Banerjee is the author of We Modern People: Science Fiction and the Making of Russian Modernity (Wesleyan University Press, 2013), which won the Science Fiction and Technoculture Studies Book Prize from the University of California. She is the editor of Science Fiction Circuits of the South and East (Oxford Peter Lang, 2018); Russian Science Fiction Literature and Cinema: A Critical Reader (Academic Studies Press, 2018); and South of the Future: Speculative Biotechnologies and Care Markets in South Asia and Latin America (forthcoming from SUNY Press). She has co-edited a Slavic Review special issue on “Russian Geopoetics” (summer 2016) and a Slavic and East European Journal special issue on “World Revolution” (fall 2017). Banerjee is a founding co-editor of the book series Studies in Global Science Fiction at Palgrave Macmillan and an editor of the journal Science Fiction Film and Television at Liverpool University Press.