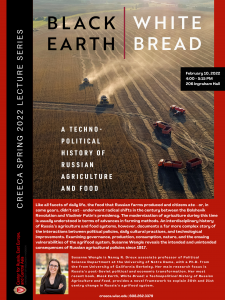 Like all facets of daily life, the food that Russian farms produced and citizens ate—or, in some years, didn’t eat—underwent radical shifts in the century between the Bolshevik Revolution and Vladimir Putin’s presidency. The modernization of agriculture during this time is usually understood in terms of advances in farming methods. An interdisciplinary history of Russia’s agriculture and food systems, however, documents a far more complex story of the interactions between political policies, daily cultural practices, and technological improvements. Examining governance, production, consumption, nature, and the ensuing vulnerabilities of the agrifood system, Black Earth, White Bread reveals the intended and unintended consequences of Russian agricultural policies since 1917. Ultimately, the book calls attention to Russian technopolitics and how macro systems of government impact life on a daily, quotidian level. 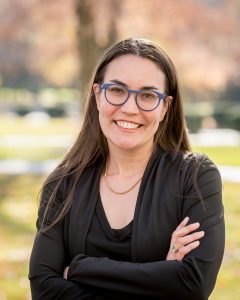 About the Speaker: Susanne Wengle is Nancy R. Dreux associate professor of Political Science Department at the University of Notre Dame, with a Ph.D. from the from University of California Berkeley. Before joining Notre Dame, S.Wengle was a post-doc at the University of Chicago. Her main research focus is Russia’s post-Soviet political and economic transformation. Her most recent book, Black Earth, White Bread; a technopolitical history of Russian agriculture and food, provides a novel framework to explain 20th and 21st century change in Russia’s agrifood system. Her first book, Post-Soviet Power (Cambridge 2015) detailed the political economy of newly created electricity markets in Russia. Her research has been is published in Governance, Governance and Regulation, Economy and Society, Studies in Comparative International Development, Slavic Review, Europe-Asia Studies, and Post-Soviet Affairs, and is supported through research funding from a variety of international sources, including the Swiss National Science Foundation, the European Commission, the Swedish Collegium for Advanced Studies, the Neubauer Collegium for Culture and Society and the Östersjöstiftelsen.