Łukasz Wodzyński is an Assistant Professor of Polish at UW-Madison. He published on early twentieth-century Polish and Russian literature and contemporary Polish prose. Currently, he works on a book manuscript Romancing Modernism: Poetics of Re-Enchantment in Polish and Russian Early Twentieth-Century Novel.

Brian Porter-Szűcs is Arthur F. Thurnau Professor of History at the University of Michigan, Ann Arbor. He is the author of When Nationalism Began to Hate: Imagining Modern Politics in Nineteenth-Century Poland (Oxford UP, 2000), Faith and Fatherland: Catholicism, Modernity, and Poland (Oxford UP, 2011), and Poland in the Modern World: Beyond Martyrdom (Wiley-Blackwell, 2014). Brian Porter-Szűcs will be participating remotely, via videoconference.

Krzysztof Borowski is a Lecturer at UW-Madison. His recent publications include encyclopedia articles on Silesian and Slavic languages in the European Union for the Encyclopedia of Slavic Languages and Linguistics (Brill) as well as a chapter on the popular perception of the Silesian variety in Poland (2018).

The discussion will be moderated by Kathryn Ciancia, Associate Professor of History at UW-Madison. Her first book, On Civilization’s Edge: A Polish Borderland in the Interwar World, was published by Oxford University Press in 2020. 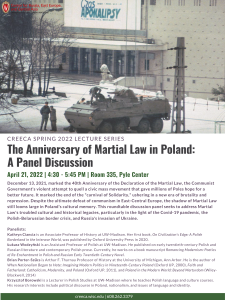 December 13, 2021, marked the 40th Anniversary of the Declaration of the Martial Law, the Communist Government’s violent attempt to quell a civic mass movement that gave millions of Poles hope for a better future. It marked the end of the “carnival of Solidarity,” ushering in a new era of brutality and repression. Despite the ultimate defeat of communism in East-Central Europe, the shadow of Martial Law still looms large in Poland’s cultural memory. This panel discussion seeks to address Martial Law’s troubled cultural and historical legacies, particularly in the light of the Covid-19 pandemic, the Polish-Belarussian border crisis, and Russia’s invasion of Ukraine.