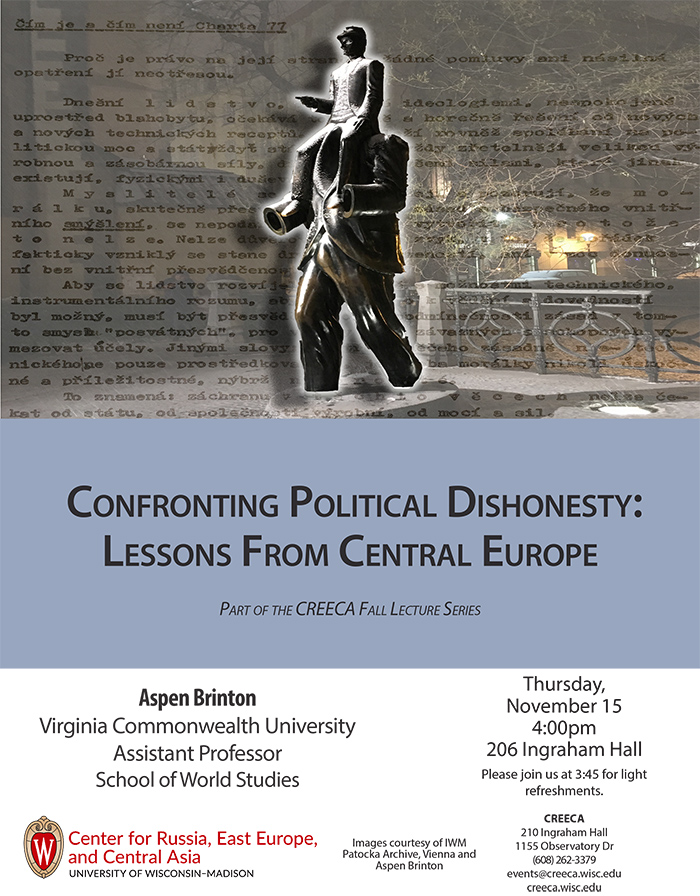 Being lied to by politicians should feel perennially familiar to all of us, as dishonest politicians and political subterfuge are not new phenomena. Nonetheless, current forms of political dishonesty feel particularly distressing because the words produced by leaders are sometimes believed by followers only because they are spoken from positions of power and frequently repeated. Power and repetition do not make truth, so what are we to do? Drawing from the writings of various Central European thinkers who understand why “speaking truth to power” can be extremely complicated in such contexts, I will argue that Central European experiences of dissenting against political dishonesty can help inform our current existential and political responses to dishonesty. Václav Havel, Jan Patočka, Czesław Miłosz, and Franz Kafka, among others, show us that to confront powerful authorities, we must act in nuanced and sometimes paradoxical ways: perhaps it is subversive to act “as if” there might still be transcendent truths that can be reciprocally recognized in diverse human communities; perhaps we can act “as if” the shared rationality of human experience and meaning is actually accessible in contexts of deep alienation; or maybe we can act “as if” history is still ours to shape through embracing a future-oriented historicity capable of shoring us up against the ruins of the past (to evoke T.S. Elliot’s Wasteland). In practice, these ideas might lead to new forms of “solidarity of the shaken” (to evoke Patočka), new samizdat, or new forms of civil society—to name only a few phenomena already showing signs of appearing and reappearing. Such conceptual ideas from Central European thought are rich and varied, open to new embodiment, and still capable of helping us to confront the untruthful pathways of our thoughts, speech, and actions.

Aspen Brinton is a political theorist specializing in democratic theory, dissident movements, East-Central Europe, phenomenology, and the intellectual history of civil society and free speech. Her most recent book, Philosophy and Dissidence in Cold War Europe (2016), examines the philosophical legacy of Eastern European dissidents during the Cold War. Her current book project examines how the thought of Czech phenomenologist Jan Patočka might be relevant for understanding dissidence more broadly.