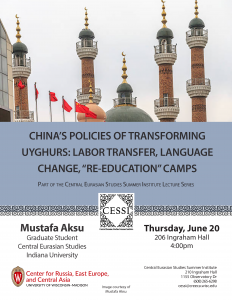 China’s on-going policies of transforming Uyghurs have been increasing more rapidly than ever before. In this talk, Mr. Aksu will discuss the main policies that the Chinese government is enforcing in Xinjiang Uyghur Autonomous Region; how did state policies influence the Uyghur people, and how different are these policies from previous ones. He will explore these transforming policies by providing both quantitative and qualitative examples in terms of labor transfer, language change, and the “Re-education” Camps.

Mustafa Aksu, an ethnic Uyghur, is a graduate student in the Department of Central Eurasian Studies and an outreach staff member at the Center for the Study of the Middle East at Indiana University, Bloomington. He is also the Director of Cultural Affairs of Campaign for Uyghurs (NGO that registered in Washington, DC). His main interests lie in language policy in Xinjiang, Turkic languages, language intelligence, and the Uyghur diaspora. In addition to being extensively involved in his own academic field, Mr. Aksu has also been an active member of Uyghur Academy since 2009. He has moderated and presented at multiple international conferences. He also organized and hosted one of the first panels among US universities on “Mass Incarceration: China’s Radical and Dangerous Policies in Xinjiang” along with the well-attended Uyghur Culture Night in October 2018 at Indiana University. He taught intensive Uyghur at University of Wisconsin-Madison’s Summer Language Program in 2018. Furthermore, he served as a Uyghur language developer at the Center for Languages of the Central Asian Region at Indiana University.