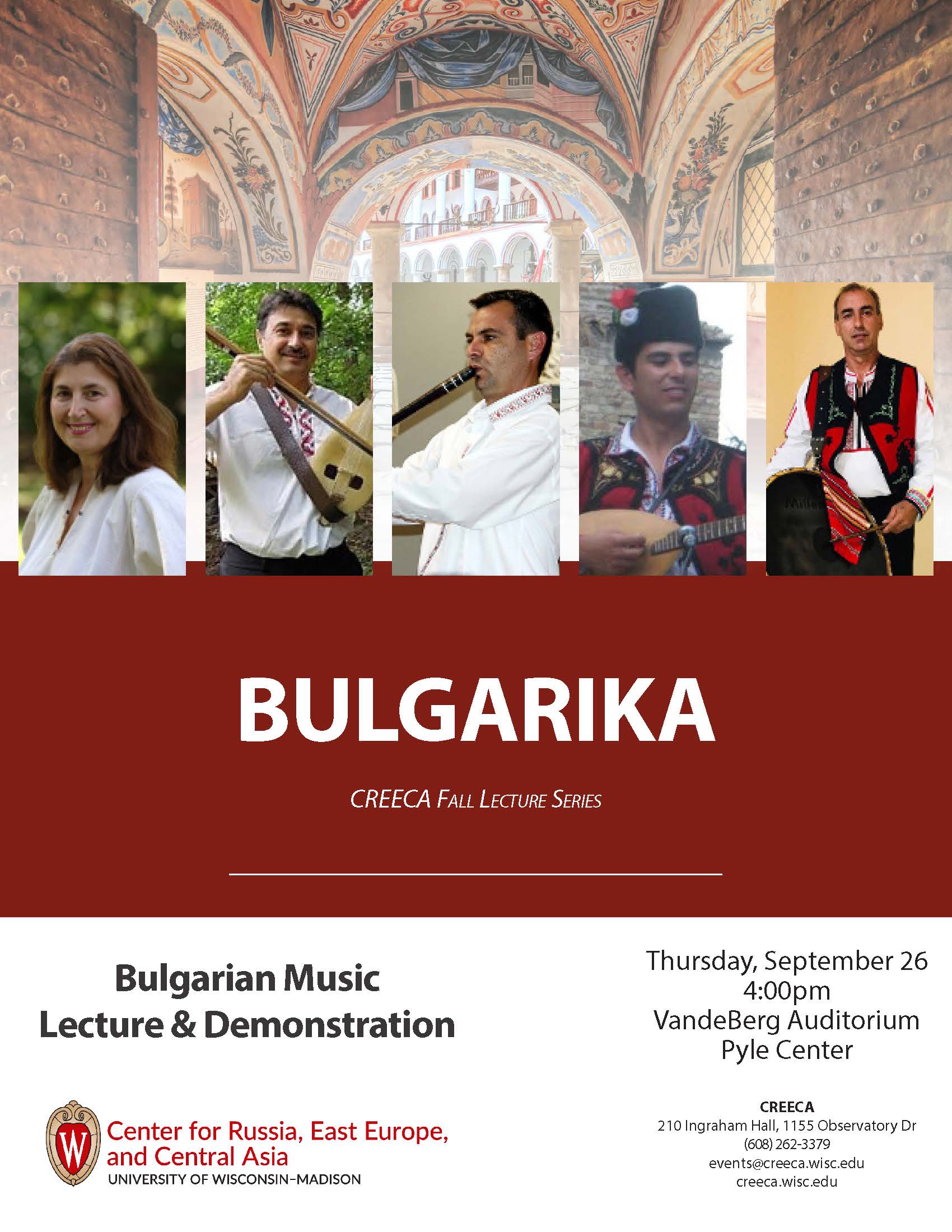 At this lecture-demo, Bulgarika will highlight notable features and capabilities of each instrument, demonstrate ensemble playing, and provide examples of Bulgarian folk music in several specific folk-life contexts, such as: various episodes of a village wedding, music for dining, the sedyanka, a work-bee at which young people sing & dance, pastoral melodies created for ruminant audiences, work songs, songs recalling historical events & experiences.

Bulgarika is a group of five maestros with decades of performing experience. They are all steeped in Bulgarian music and rhythms from a young age. In their performances they draw on formal and informal training, as well as their experience as teachers. The band maintains extensive contact with other Balkan natives, from the Black Sea to the Adriatic, and bring the very best of the Bulgarian folk-music tradition for your enjoyment.

Donka Koleva (vocals), an internationally prominent singer, is a native of the town of Rudozem in the Rodope region of Thrace. She graduated from the National School of Folk Arts in Shiroka Luka, Bulgaria, and performed for three years with Sliven Folk Dance and Music Ensemble. She started her singing career with the band Kabilé in 1982 and in 1986 became Director of the Folk Song Chorus of Sopot. Since then she has been a featured soloist on Bulgarian national radio and television, has participated in numerous singing competitions in Bulgaria and Europe and has been featured on multiple recordings. In 1997 her recording of “Javore” was named Song of the Year in the Bulgarian national competition. Since immigrating to the U.S. she has taught and performed widely across N. America and Canada, both privately and at camps, festivals and other events. In 2005 Donka contributed to the soundtrack for the film “Everything is Illuminated”. In addition to her vocal talents Donka serves as Bulgarika’s manager and has organized 14 national tours for the bands Kabilé, Bulgarika and for the Kolev Family Ensemble.

Nikolay Kolev (gadulka), a native of the Thracian Rose Valley village of Karavelovo, has been playing gadulka since age 10. After graduating from the National School of Folk Arts in Shiroka Luka, Bulgaria, he performed for three years with the Sliven Folk Dance and Music Ensemble. In 1984 he founded the orchestra “Sopot”, in 1985 the wedding-music ensemble “Rozova Dolina” and in 1992 the prize-winning ensemble “Balkanski Glasove”. In 1994 and 1995 the latter group took first prizes at the Varna Festival. Nikolay has accompanied many well-known singers including Vulkana Stojanova, Roumen Rodopski and Todor Kozhuharov. He has also taught many students at a number of Balkan camps in the U.S. In 1999, Nikolay was the first Bulgarian to be recognized by the Slavic Heritage Council of America for his outstanding contributions to music.

Temelko Ivanov (kaval), has been a member of the renowned Trakia Ensemble since 1996. In 1990 he graduated with honors from the National Music School “Filip Koutev” and in 2000 from the Bulgarian National Conservatory with specialties in Conducting and Music Pedagogy. He subsequently received a Masters in Performance Arts from the Conservatory. He has served as a lecturer and jury panelist at multiple folklore seminars and competitions in Bulgaria.

Nikolay Kodzhabashev (tambura), is a soloist with the Sliven Folk Dance and Music Ensemble and a member of the Perla folk band (tambura, guitar). He graduated in 2005 from XI K. Konstantinov High School in Sliven with a music profile and in 2010 from the Bulgarian National Conservatory. In 2011 he received a Masters in Performance Arts from the Conservatory. He received multiple awards in youth music competitions and won the First Place award of the “National Folk Competition for Tambura Performers Rusko Stefanov” in 2007 and 2009.

Marin Chalamov (tupan), is from the village of Vasil Levski, near Karlovo, and began playing tupan professionally at age 15. He has accompanied popular musicians and singers such as Donka and Nikolay Kolevi, Rumen Rhodopski, Savka Sarieva and the band Rodopski Izvori. He has taught for many years in the Rozova Dolina Ensemble and performs with the reknowned Dubenskata Grupa. In addition to his work on-stage and teaching, Marin is currently one of the most popular tupan makers in Bulgaria.