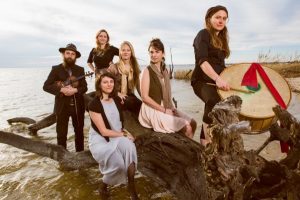 Hailed as a band with “galactic ambitions” by The New Orleans Advocate, Blato Zlato is a powerhouse of accomplished players from Europe and the United States with a collective goal to produce meaningful cultural and musical bridges between old world and new. The band puts a modern Louisiana twist on traditional music from the Balkans and Eastern Europe, with a particular focus on Bulgarian music and dark, improvisational arrangements. In 2019 Blato Zlato released their sophomore album, In The Wake, following acclaimed 2017 releases of debut album Swamp Gold and the limited-edition EP Voyage.

Blato Zlato will perform a first set as concert in cabaret setting with tables and chairs. For the second set, tables will be cleared and dancing encouraged.

You can listen to all their published music here: https://www.blatozlato.com/music/

Admittance is $10 at the door. This event is presented by the Village Dance House.