(All lectures will be streamed virtually – free and open to the public.)

“American Literary and Cultural Diplomacy during the Cold War:
Kurt Vonnegut in the USSR”

with Sarah Phillips
Professor of Anthropology; Director of the Russian and East European Institute,
Indiana University

This talk explores a fascinating yet little-known chapter in the history of literary and cultural diplomacy during the Cold War—the popularity of the American author Kurt Vonnegut in the Soviet Union during the 1970s. Phillips will touch on several fundamental questions regarding Vonnegut’s “Soviet chapter”: What was it about Vonnegut’s writing—the style, the content, and the received messages—that so appealed to readers and literary critics in the 1970s Soviet Union? Were Vonnegut’s works censored, and if so, what exactly fell prey to the infamous “Red Pencil” of the Soviet censors? Phillips draws on interviews with readers to track the surprising “social life” of Kurt Vonnegut’s ideas in Russian/Soviet translation. 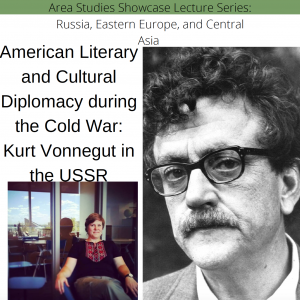 Presented by the 2018-2021 U.S. Department of Education Title VI National Resource Center and Foreign Language and Area Studies grant recipients for Russia, Eastern Europe, and Central Asia. Follow this link for the full lineup of lectures.

The National Resource Centers (NRC) program provides grants to establish, strengthen, and operate language and area or international studies centers that will be national resources for teaching any modern foreign language. Grants support: instruction in fields needed to provide full understanding of areas, regions or countries; research and training in international studies; work in the language aspects of professional and other fields of study; and instruction and research on issues in world affairs.