Annus Mirabilis? The Lessons and Legacies of 1989 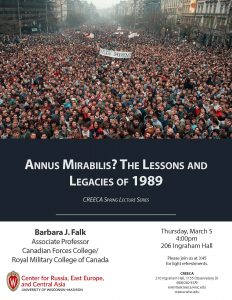 After the fall of communism, regardless of debates on the nature of systemic change, most agreed on the importance of non-violence. In this paper, I argue that the year 1989 represented a revolution in the very idea of revolution—self-limiting, non-violent, and yet far reaching in impact. However, Cold War triumphalist narratives and Western liberal mis-readings have together misrepresented the lessons and legacies of 1989, generating a “recipe-based” approach to regime change. Yet today multipolar great power politics, the soft power decline of the United States and liberal democracy more generally, an international legal regime that dis-incentivizes unpopular authoritarians to step away from power, and the moral hazard associated with the doctrine of Responsibility to Protect, have made non-violent or “1989-type” revolutions far less likely.

Barbara J. Falk is an associate professor in the Department of Defence Studies at the Canadian Forces College/Royal Military College of Canada, and author of The Dilemmas of Dissidence: Citizen Intellectuals and Philosopher Kings (2003) and Political Trials: Causes and Categories (2008). Her primary research interest is political trials, particularly in the persecution and prosecution of domestic dissent. She is currently writing a book on comparative political trials across the East-West divide during the early Cold War. Prior to her academic career, she worked in the both the private and public sectors in human resources, labour relations and women’s issues.