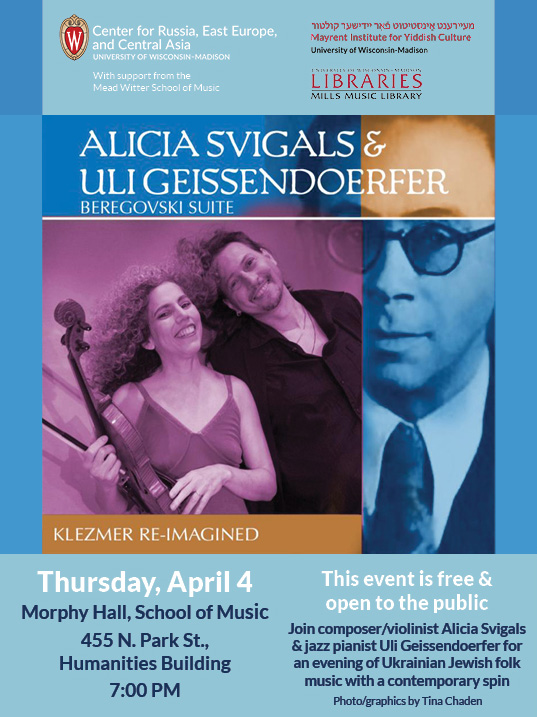 The performance will take place in Morphy Hall, within the George L Mosse Humanities Building, 455. N Park St. This event is free and open to the public.

Concert Description:
In the 1930’s a Jewish scholar from Ukraine named Moshe Beregovski set out, with eerie prescience, to collect and preserve the deep and rich Jewish musical tradition around him. On what turned out to be the eve of the destruction of European Jewry, Beregovski organized expeditions to Ukrainian “shtetlekh” (small Jewish towns) and sought out the eldest singers and instrumentalists he could find, asking them to pour their collective folk knowledge into his recording horn. In this way he managed to save thousands of beautiful Jewish folk songs, klezmer dance tunes and religious melodies on wax cylinders, the medium of the day. A few years afterwards, the culture he had documented was destroyed in the Holocaust, and Beregovski himself was arrested and sent to the Gulag. He never saw his work published in his lifetime, and for decades it was thought that those precious and important recordings were gone forever as well. But in the 1980’s ethnomusicologist Mark Slobin published Beregovski’s transcriptions of his collection, and in the 1990’s, with the opening of the Soviet Union, the cylinders were unearthed in a dusty archive in Kiev. Now those long-forgotten melodies and voices are beginning to speak to us again.

The concert will last 75 mins without an intermission.

Co-sponsored by the Center for Russia, East Europe, and Central Asia; the Center for Jewish Studies; and the Mayrent Institute for Yiddish Culture, with support from the Mead Witter School of Music and Mills Music Library.