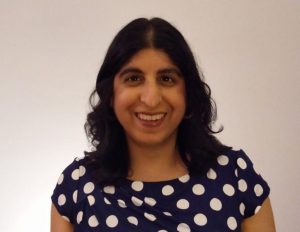 At UW-Stevens Point, Anju developed and taught over a dozen different classes, including History of Mexico, U.S.-Cuba Relations, and Women and Gender in Latin America. In 2013, she organized and taught one of the first UW System for-credit undergraduate study abroad programs in Cuba, which ran again in 2014 and 2016. She also founded an interdisciplinary speaker series that earned a grant from the National Endowment for the Humanities/American Library Association.

In this interview, Anju shares why she thinks area studies is a critically important subject of inquiry and how UW-Madison can lead the way in strengthening, expanding, and diversifying this field of study. Anju will assume her new position at UW-Madison on June 1, 2019.

The Institute for Regional and International Studies (IRIS)–a unit of the International Division–is a consortium of nine area studies centers, the Wisconsin Intensive Summer Language Institutes (WISLI), and the International Studies major. IRIS was founded in 2016 to consolidate administrative support services for each of the nine centers in order to cement UW-Madison’s legacy as national leader in area studies education. The IRIS Executive Director position was created in part to develop and support cross-regional programming on campus. Former Associate Director of African Studies Jim Delehanty held the position from from 2016-2018, and Ron Machoian served as interim Executive Director in 2018.

Why is area studies so important as a field of study, and to you personally?

As someone who earned my bachelor’s, master’s, and doctoral degrees in history, I am a strong supporter of single-discipline approaches to the study of various regions. At the same time, there is a crucial need for specialists in overlapping areas to work across disciplinary lines to share context and depth for the benefit not only of current scholars, but also for those who live and work in the countries in question. In Africa, South Asia, Southeast Asia, the Middle East, and Latin America and the Caribbean, for example, area studies is an effective way for social science and humanities scholars to address the concerns of populations still reeling from legacies of colonialism, war, displacement, migration, authoritarianism, neoliberalism, and climate change. In East Asia, Western and Eastern Europe, Russia, and Central Asia, the Cold War continues to shape political and economic alliances as well as limit common paths forward on issues such as migration, demographic decline, and sustainability. That area studies practitioners are fluent in one or more of the languages of their region makes collaboration across national lines far more likely, which has enriched the teaching and scholarship produced in those regions and North America.

I have a personal connection to area studies, as well. Too often, K-12 and higher education in this country emphasizes the study of regions (especially those outside of Western Europe) primarily in terms of their relationship with the United States. This was certainly true of my own experience. Though I had an excellent public K-12 education in Western Massachusetts, I grew up with virtually no knowledge of South Asian history aside from what I learned from family members who experienced anticolonialism, independence, Partition, and migration. Similarly, what I learned about Southeast Asia, Latin America, Eastern Europe, and Russia/Soviet Union during the late Cold War and its aftermath was filtered through U.S. narratives. My decision to center my work on areas that had long fascinated me–first South Asia, and later Latin America and the Caribbean–was a conscious rejection of what some now call an “America First” identity. It was built on the recognition that each region is central to our planet’s future; that, despite historic and geographic inequities, no region is superior to another in cultural or human terms; and that we all share far more interconnections than differences.

What do you see as the future of area studies at UW-Madison?

The cultural, historic, economic, social, and political ties that have bound certain regions together for generations are in many ways stronger than ever. At the same time, we are rapidly moving toward a world (despite the apparent rise of strongman populism) in which national and even regional lines are starting to blur. What I envision for UW-Madison’s area studies is for all of us–students, staff, and faculty–to be fully cognizant of this moment at the fulcrum of the field, strengthening our collaborative work in each area studies center while doing our utmost to build connections among them.

Having taught several courses in diaspora and ethnic studies, I believe that area studies can do more than teach U.S. residents about the rest of the world; it can also teach us about this country. I initially connected to Latino/a/x Studies, for instance, through my work on Latin America and the Caribbean. While there are pros and cons of understanding U.S. immigration and ethnic studies history from a non-U.S. vantage point, it nonetheless decenters the implicit narrative we sometimes have that the U.S. is the world’s most desirable destination and that migrants are therefore destined to “assimilate.” Instead, it focuses on the motives, trajectories, and transnational connections among migrants and explores their ties to their countries of origin, the U.S., and other countries as well.

I also envision greater collaboration with communities across the state as part of the International Division’s promotion of a Global Wisconsin Idea. To me, the Global Wisconsin Idea means not only expanding UW-Madison’s institutional and faculty connections with universities and centers abroad to be of service beyond our state borders, but also building bridges to UW System schools, technical colleges, K-12 classrooms, and community organizations throughout our state. Nor should that be a one-way relationship. Just as UW-Madison relies on the robust exchange of ideas, information, and individuals with its partners abroad, a stronger reciprocal partnership with our fellow Wisconsinites would help to make international and area studies part of the educational experience for all.

What does promoting diversity look like in area studies?

Diversity to me begins with more equitable representation of all major ethnic and racial groups in our undergraduate and graduate pool, in events geared to campus and community members, and in our outreach efforts. I am excited to see all of the ways in which UW-Madison is reaching out to underrepresented students of color to offer them a more internationalized educational experience, such as offering sponsored study abroad trips. Based on where the need is greatest and where our staff and faculty can be most effective, I will continue pushing for their inclusion and support in everything I do. By diversifying our funding base, as I aim to do, we can be especially impactful in supporting our underserved students of color.

Beyond that, area studies needs to appeal more explicitly to first-generation students, heritage world language speakers including U.S.-born or -raised children of immigrant families, and non-traditional aged students such as veterans and working parents. There is a pressing need to recruit students from Wisconsin’s rural areas, especially those who have not yet left the United States or who have only done so on the occasional family cruise or mission trip. When recruiting for my Study Abroad programs to Cuba, I frequently spoke with students who said they would “love” to travel there–yet never applied. Though financial aid was available and the cost well below comparative offerings, a bigger hurdle was the idea of traveling so far out of their comfort zone (especially if their parents were opposed) when many had never left the Upper Midwest. Area studies would therefore appear to be a natural point of entry for rural students eager to learn about the rest of the world. Beyond greater intercultural understanding and other lifelong skills, it would provide them a practical springboard to engage in international study, work, and travel–such as short-term or semester-long study abroad, international internships, and foreign graduate study.

How would you describe your leadership style?

I hope to lead by example as well as through a positive relationship with every one of the staff, faculty, and administrators I work with. I operate from the principle that we can get amazing things done if we value the same goal, respect and learn from one another, work together, and honor the best traditions of this state and campus.

Behind my collaborative leadership style is a belief in bridging divides and in seeing the world from as many perspectives as possible. I have a lot of experience in that regard. I’m a child of immigrants who struggled to fit in despite representing the “model minority.” I’m an Ivy League graduate who found one of my greatest joys inside the boxing ring. I’m a historian with one eye on the past and the other on the present and future. We all have multiple perspectives within us, so it’s just a matter of coming together and finding where we connect. As long as we share a common mission, all of us–individually and as a team–can make a difference to our students, our communities, and our state.